The Nokia G20 has been updated to Android 12 with the May 2022 security patch, according to reports.

The Nokia G20 is one of the few mid-range Nokia smartphones that were released in the United States last year. It was only a matter of time after the phone was out on the market a year ago before HMD Global released the much-anticipated Android 12 upgrade.

The Nokia G20 could be the latest Nokia smartphone to receive the Android 12 upgrade. The phone was released in India in July 2021 and came pre-loaded with Android 11. There is currently no information about the update's availability in India. The Nokia 3.4, Nokia 5.4, Nokia T20, and all future Nokia phones with a Unisoc SoC are scheduled to receive the Android 12 update next, according to the report. 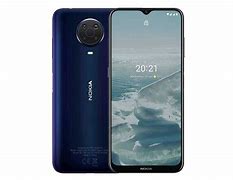 The Nokia G20 was released in India in July of last year and comes preloaded with Android 11. A 6.5-inch IPS LCD touchscreen with a 60Hz refresh rate is featured on the smartphone. An octa-core MediaTek Helio G35 SoC powers it. The phone is powered by a 5,050mAh battery and comes with a 10W charger.

In India, the Nokia G20 is offered in a single 4GB RAM and 64GB storage version for Rs. 12,999. It has a triple-slot tray that can hold two Nano-SIM cards as well as a microSD card (up to 512GB). While the price isn't outrageous for a basic smartphone these days, a quick look at what the competition has to offer in terms of specs and value-added features leads to the conclusion that the Nokia G20 is overpriced.

This phone's design is a cross between the Nokia 2.4 and Nokia 5.4. It is 9.2mm thick and weighs 197g. The Nokia G20 has a plastic frame and back panel, yet it doesn't appear or feel cheap. The back panel has a thin grooved texture that is both comfortable to hold and gives the phone a quality feel.