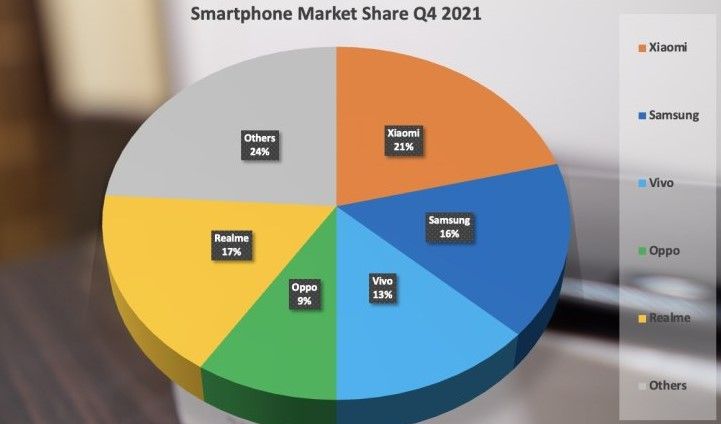 According to Raju Pullan, Senior Vice President, MX Business, Samsung India, the company's growth in March indicates a stronger double-digit increase in the current April-June quarter (Q2). The fact that Samsung is growing in India shows that it has overcome component shortages that have afflicted most of its competitors.

"This growth is impressive given that the entire sector is experiencing supply chain restrictions, and Samsung, by leveraging its vertically integrated supply chain experience and size, could better navigate the shortages," said Neil Shah, Vice President of Counterpoint Research.

Within a month of its sale, the Galaxy S22 series became Samsung's best-selling flagship smartphone in India. "Samsung's smartphone business grew by 9% in value in the first quarter compared to the same period last year," Pullan said.

Vivo is strengthening its attention on the premium part of the market in order to compete with Apple and Samsung in the country. In the previous 12 months, the business, which co-creates its premium phones with Zeiss, claimed to have gained 300 percent in the Rs 30,000 and above price range in the offline channel, and it expects the same development trajectory this year.

Paigam Danish's India director of business strategy said "In the previous 12 months, we have increased 300 percent in the offline channel for the premium sector because we launched the right product at the right time. It gives us hope to keep releasing new things. For premium phones, the online channel has expanded. We've grown a lot, but not as much as we did offline."

The premium market seems promising. We are certain that we will see tremendous growth this year. According to Danish, the premium smartphone market in the country is developing, with users searching for more than simply performance. "When looking for luxury phones to upgrade, consumers prioritise design and camera."

India is still a smartphone upgrading market, with most people looking to upgrade to the next price tier when purchasing a new phone. This is one of the primary reasons for the premium market's continued expansion. According to Counterpoint, Apple remained the top-selling premium brand in the Rs 30,000 and above price range in the first quarter, followed by Samsung and OnePlus. As a result of Apple's success, companies such as Xiaomi, Oppo, and Realme are focusing more on the country's premium market.

"Many brands are introducing multiple goods in this price range. It's a market that will continue to expand," Danish added. According to Counterpoint, Vivo has a 15% market share in the Indian smartphone industry in the first quarter of 2022. "the Omicron wave in the country during the first month of the quarter, which impacted the offline market, focusing more on the mid and premium categories, and growing competitiveness affecting volumes in the mass-market segment," according to the research firm.

According to the Vivo CEO “Affordability and financing options, are also important factors in the premium segment's rise.” "Affordability is making expensive phones more accessible. Cashbacks were previously available, but now EMIs, subscriptions, and a variety of additional incentives are available," he noted.

The X series of premium smartphones is now being expanded by the corporation. It has co-engineered the camera technology with Zeiss once again, like with prior generation X series handsets.

"The Vivo X80 series is part of our overall plan to strengthen it... We conducted research in India and tailored the product to the Indian market," Danish explained.

The Vivo X80 series, the company's flagship device, will also be available in India.

It plans to invest an additional Rs 1,600 crore by 2023 to treble its annual domestic production capacity and establish India as a worldwide export powerhouse.